What You’re in For

Allan knows, better than most, the meaning of the saying "you are your own worst enemy."

In What You're in For, author Andrew Wilmot dredges visions from the psychic depths to create an unflinchingly visceral portrayal of anxiety.

"A surreal, slow-build story that will stay with me a long time. Brilliantly horrible."
- Kirsty Logan, author of The Gracekeepers and A Portable Shelter 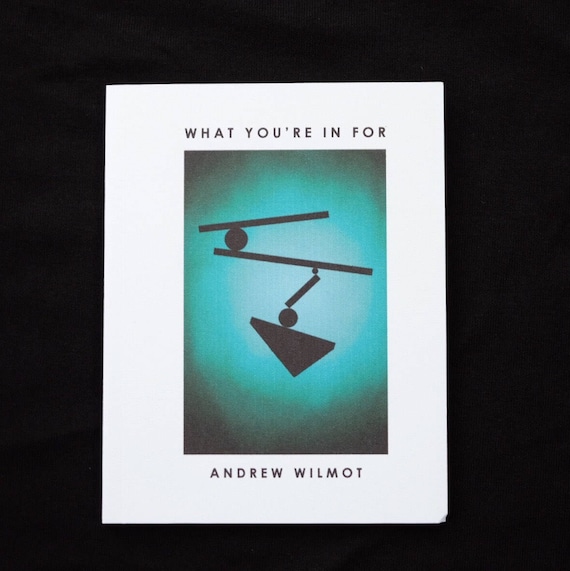 YESTERDAY IT WAS SAFE. Yesterday it was Grace Kelly and Singing in the Rain. Allan had heard the music and seen the light flickering from beneath the door before entering her room.

Yesterday was a good day.

Today Allan woke at five to eight with what felt like a ten-pound medicine ball balanced precariously on his chest, forcing the air from his lungs. He floundered in the dark for the liquorice whip of cord protruding from his torso and yanked it out, immediately discharging a deep sigh. He then reached over and switched off the alarm on the clock radio glowing green at the corner of the nightstand.

His thoughts were muddled. He wondered which of them — and how many—had plugged into him while he had slept. If he shut his eyes again he’d be able to hear their disparate thoughts, fading but still present. He thought briefly about turning on the light, looking to see who’d moved in the night, whose face was a little fuller, whose colour a little less pallid, but decided against it for fear of waking one or all of them sooner than was necessary.

Their bodies lay scattered between the bed and the door, limbs interlaced like fallen latticework. As Allan’s eyes adjusted to the light slicing thinly through the blinds, he viewed pockets of carpet like miniature demilitarized zones spread throughout the huddle of lightly snoring bodies. He slowly pushed back the covers and swung his legs out over the foot of free space right next to the bed. He charted a path through the still-slumbering bodies and made his way to the door. He gently turned the knob, careful not to brush the outstretched hands on the ground.

ANDREW WILMOT is a writer, editor, and artist living in Toronto, ON. He is a graduate of the SFU Master in Publishing program and spends his days writing a lot and painting stupidly large pieces. He currently works as a freelance reviewer, academic editor, and substantive editor with several independent presses and publications. To date his work has been published in Found Press, The Singularity, Glittership, Drive In Tales, and Turn to Ash, and he was the winner of the 2015 Friends of Merril Short Story Contest. His first novel, The Death Scene Artist, will be published by Buckrider Books, an imprint of Wolsak & Wynn, in Fall 2018.

One night, thirteen-year-old Ned Powell is horrified to discover that his skin has taken on the physical properties of glass. Over the years, he finds himself resented by his father, coddled by his mother, rejected by society, and always on guard for the next devastating crack. In order to make peace with himself, Ned must overcome a fragility that goes much further than skin deep.

“An original, tender, metaphoric story about a man made of glass.”
— Steph VanderMeulen, Bella's Bookshelves

In a suburb that is nowhere and everywhere, Jorgen deals with the feelings of alienation and frustration from his collapsing relationship by getting into his car, putting on Patti Smith, and searching for meaning and belonging anywhere he can — regardless of whether he is welcome or wanted.

An electrical engineer who has lost almost everything - his marriage, his job, his father - retreats to his garage to re-evaluate and reorganize the various loose ends of his life, and ends up assembling a thermonuclear device instead.

June's mother is getting married and there's nothing June can do about it. Counting down the days to the wedding while trapped with a sort-of friend and unwanted family-to-be at their lakeside cottage in the Kawarthas, June searches desperately for a way to make the world - and her life - stand still.

Cross Yourself
by Lana Storey
[dot_recommends]

Some time after the incomprehensible death of his son, Joan Miró has settled into his new job working the overnight shift at a Hasty Market in Toronto. He has plenty of time to think beneath the fluorescent lights of the convenience store: of ghosts and late nights, of downtown living and dying, of customer service and self-preservation, of the beauty of the night sky, and of the attempts people make to connect with one another despite seemingly insurmountable distances. These fragments of life prove as difficult to make sense of as any code—until one night, when an extraordinary series of events suddenly teases a pattern from the dark.

“In this graceful, dark, and nuanced piece, Lana Storey reveals a private man unhinged by grief. These are events—and this a narrative—that will stay in my mind for a long time. Never one to shirk from difficult truths, Lana Storey writes in the tradition of George Saunders: an original, at times disturbing, but ultimately transformative worldview.”
— Carolyn Smart, author of Hooked: Seven Poems and At the End of the Day

“Cross Yourself is Lana Storey’s gorgeous swirling image constellation, a story about a man becoming unhinged from the universe and finding redemption in a downtown Hasty Market convenience store. A vibrant, beating heart of a short fiction, Cross Yourself is a vortex worth being pulled into.”
— Kathryn Kuitenbrouwer, author of the 2005 Amazon.ca/Books in Canada First Novel Award finalist The Nettle Spinner

In the late 60s, the newest member of a group of all-female pearl divers — the ama — sees her life, and the lives of those dear to her, disrupted by an unlikely force: a James Bond film that sends American men to Japan in search of their own personal 'mermaids'.

Somehow There
Was More Here
by Danny Goodman
[dot_recommends]

In New York City, Ben smokes too much and sleeps with women as a way to deaden his insecurities. With every indiscretion, he fights off adulthood for one more day, until the return of an ex-lover leaves him unsure of everything. Ben’s best friend, Josh, struggles to find the good in his marriage to Maddie, even as he searches for a way to keep from losing her. Ben’s neighbor, Mrs. Aguilera, looks to make peace with those she has already lost. Gripping tightly to one another like the oddest of families, Ben and his friends embody the place in which they live: a city where everything combines, with a touch of perfect madness, into something more than the sum of its parts.

“I love this story because it’s just plain good. The characters are broken and unsure, but the love they have for each other and the humor that carries them along is genuine and lovely to behold. This story made me laugh even while it was hitting me in the gut, and I’d like nothing more than to sit down and drink a beer with everyone in it. Mr. Goodman, thank you for rocking my literary waffle.”
— Lish McBride, author of Hold Me Closer, Necromancer