Operation Chairman
of the Board

Hannah and Gary married young, before either had a chance to figure out who they were or what they needed in life. Separation and time has given Hannah the opportunity to grow up. Gary, on the other hand, has only grown stubborn, and more desperate to keep up with his ex. By 2016 Lit POP Award winner Shannon Alberta, Operation Chairman of the Board is a twisted, yet heartfelt, story about how some people view love as a journey, and others as a competition. 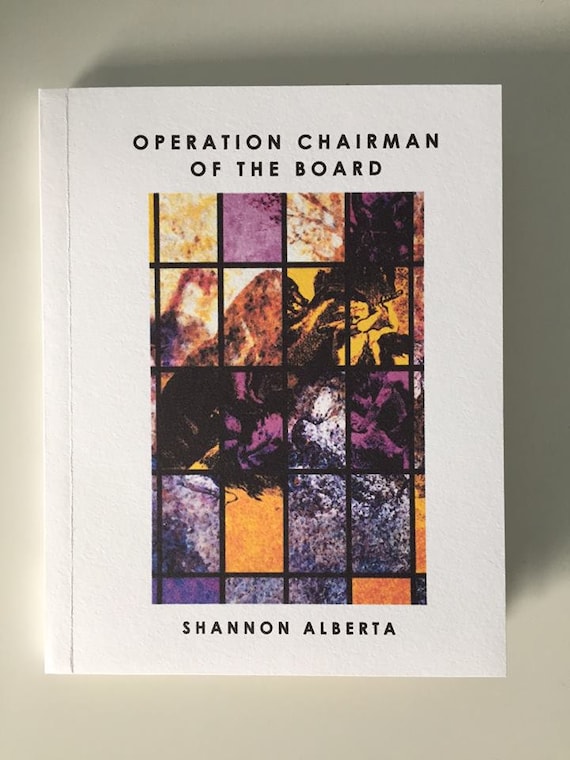 I HAVEN'T EVEN TAKEN off my work shoes when Gary calls for the third time in a row. When I finally answer, he says the toes on his left foot are numb and could I come quickly.

“I can’t,” I tell him, parting the curtains in the front window and scanning the street for Eddie’s red Yaris.

“Please, Hannah,” he says, fear coiled tight around his throat like a python.

“What colour are they?” I slide my purse off my shoulder and let it fall, the entry rug absorbing the dull thud.

“I’m not going all the way there if you don’t at least look first.”

“Fine.” He puffs into the phone. “The edges look blue to me.”

All of this is a movie I’ve seen a thousand times. In this scene, his paranoia stirs him up off the couch. In the next one, he paces his living room like it’s a cage. The finale is the worst. Eddie told me the proper name for it: hypochondria-induced panic disorder. My role? He says I’m what they call an enabler.

“I knew this was how it’d go down for me,” he says. “Eventually. I told you. Remember?”

“It’s probably nothing. Just watch TV until I get there.”

I leave a note for Eddie on the kitchen table. It says I’ve gone to Bobbi-Sue’s for wine and chit-chat, and that I love him the way a fat kid loves cake.

BLUE TOES / BLUE TOES / Whatcha gonna do? / Whatcha gonna do when they come for you? I was gonna sing that when Hannah answered the phone, but then she might’ve mistaken my parody for a lack of gravitas and stayed home cuddling with my replacement. I’ve got gravitas coming out the waz. It’s just that my brain knows shit’s about to get real and it’s trying to lighten the mood. Like the orchestra that kept playing as the Titanic went down.

I had more details prepared, in case she asked. I would have reminded her that despite it being August, despite my being under a blanket, the tips of my third and fourth piggies are the colour of those fake tombstones people stick in their front lawns at Halloween. Eskimo toes. Couldn’t have made that joke either; Hannah’s heart bruises so easy.

“It’s probably nothing,” she said. Everyone says that until the day they’re ass-over-brainpan wrong. She has a lot of reason to hope it’s nothing. Me being sick would be the shit-streak in her fancy new white undies. She’s done so much work to get to a place where she isn’t coming around much anymore.

Last time she wouldn’t even take off her shoes. I said to her, “My apologies; I was under the impression our vows still meant something.”

“But not everything,” I said.

And what could she say to that? Nothing. Instead, she held a smile on her face, the kind of grin a five-year-old gives when you ask if they pissed the bed again.

At least she’s coming over.

I text Dennis: Operation Chairman of the Board is a go.

SHANNON ALBERTA's stories have appeared in: The New Quarterly, Matrix Magazine, and Joyland Magazine. Her story "Perv Jungle" was chosen as first prize winner in the 2016 Lit POP Awards. In 2014, she won first prize in the Eden Mills Writers' Festival literary contest. She teaches at Sarah Selecky's Story Is a State of Mind School, lives in Toronto, and once spent 24 hours with her leg in a bear trap. Visit her at shannonalberta.com.

In a world terrorized by a mysterious criminal organization that recruits children as its foot soldiers, a boy reflects on the journey - steeped in a cocktail of friendship and fear - that has drawn his life past the point of no return.

A small-time internet scammer is shaken from her somewhat safe new life when an investigator arrives with questions to do with her erstwhile "period of moral decline" — specifically, the whereabouts of a young woman whose brief, bright friendship nearly steered her from the stability she now craves.

Portraits of people marooned within themselves, trapped by their past experiences, by uncertainty and anxiety — individuals for whom each new situation is a grueling journey towards the present, a place where action and choice are possible. In Second World, Matt Cahill illustrates, with honesty and empathy, how the most important breakthroughs are not the life-altering revelations, but rather the minor miracles that get us through each day.

Off the Main Highway
by Courtney McDermott
[dot_recommends]

At the Chickasaw Motel, three generations of the McGuinness clan are led by their elderly and overbearing patriarch. Only little Riley, “the smartest f-ing kid”, is spared the brunt of Grandpa McGuinness’s cruelty; ironically, it is his encouragement that provides her with a way out.

Cross Yourself
by Lana Storey
[dot_recommends]

Some time after the incomprehensible death of his son, Joan Miró has settled into his new job working the overnight shift at a Hasty Market in Toronto. He has plenty of time to think beneath the fluorescent lights of the convenience store: of ghosts and late nights, of downtown living and dying, of customer service and self-preservation, of the beauty of the night sky, and of the attempts people make to connect with one another despite seemingly insurmountable distances. These fragments of life prove as difficult to make sense of as any code—until one night, when an extraordinary series of events suddenly teases a pattern from the dark.

“In this graceful, dark, and nuanced piece, Lana Storey reveals a private man unhinged by grief. These are events—and this a narrative—that will stay in my mind for a long time. Never one to shirk from difficult truths, Lana Storey writes in the tradition of George Saunders: an original, at times disturbing, but ultimately transformative worldview.”
— Carolyn Smart, author of Hooked: Seven Poems and At the End of the Day

“Cross Yourself is Lana Storey’s gorgeous swirling image constellation, a story about a man becoming unhinged from the universe and finding redemption in a downtown Hasty Market convenience store. A vibrant, beating heart of a short fiction, Cross Yourself is a vortex worth being pulled into.”
— Kathryn Kuitenbrouwer, author of the 2005 Amazon.ca/Books in Canada First Novel Award finalist The Nettle Spinner

The anarchic relationships holding together a group of teen girls - whose lines between love and hate, jealousy and loyalty, are not so much drawn as they are furiously scribbled - are put to the test at an unforgettable birthday party. This story captures all the angst and uncertainty of adolescence, with prose as sharp and jarring as a smashed kaleidoscope.

“Rarely an author comes along whose work hits you with the impact of a slap. I have had this experience with the work of Jayne Anne Phillips, with Lorrie Moore and Mary Gaitskill; most recently I have felt this on discovering the writing of Kirsty Logan. Her work is elegant, minimal, and innovative, but underlying it all is a great passion. If the world is a place where talent is recognised—in time, I believe, we may come to say her name alongside the aforementioned.”
— Ewan Morrison, author of Swung

An electrical engineer who has lost almost everything - his marriage, his job, his father - retreats to his garage to re-evaluate and reorganize the various loose ends of his life, and ends up assembling a thermonuclear device instead.